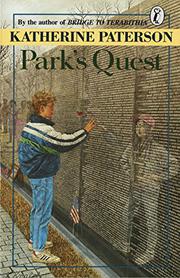 In a multilayered novel filled with themes of reconciliation and renewal, the two-time Newbery winner draws parallels between a boy's quest for the family of his father, killed in Vietnam, and the Arthurian legends. Park's pretty mother, grieving and withdrawn, has told Park nothing of his origins, so, when Park is 11 and the Vietnam War Memorial is being dedicated in Washington, his need to know increases and he convinces his mother to let him visit his paternal grandfather on a Virginia farm. There Park discovers the existence of his Uncle Frank, Frank's Vietnamese wife and stepdaughter (Thanh, six months younger than Park)—plus an inarticulate grandfather, paralyzed by strokes. Thanh is "sassy" and competitive, full of life and mischief, and at first has no use for Park; but she is also wise and generous at heart; when she and Park discover that they are half-brother and sister, it advances their growing friendship. Park has long had the habit of imagining himself a knight errant or long-lost heir; in truth, he is finally both, but not in the conventional terms of his fantasies. Using elegantly chosen symbols, Paterson entwines noble legend with contemporary realism; and the two worlds merge when the pure springhouse water Thanh defends so fiercely when she first meets interloper Park is shared by the two and their grandfather. Park's quest is a fine journey of discovery, and the characters he meets are uniquely memorable.