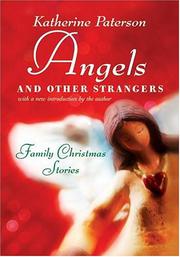 ANGELS AND OTHER STRANGERS

Paterson's well-tuned, sentimental Christmas stories seem less well suited to a children's book than to a family magazine, especially a church magazine—and indeed the flap tells us that they were originally read in Christmas Eve church services by the author's minister husband. Of the nine, three effect epiphanies of sorts in church; in another a child runs to church for comfort (and finds it with the Sunday-school teacher next door); and others involve, respectively, a lonely minister's home service, a child's bogus creche, a crucifix (thrown by a poor Spanish woman at a minister's genteel mother), a homeless, far from holy mother-and-child who suggest ironic parallels on Christmas Eve, and an old black samaritan/hitchhiker who is taken for an angel by the child of an apprehensive woman driver. Several, like these last three, set up encounters between comfortable middle-class Protestants and others who are poor, black, and/or outcast; in these Paterson does well with the interplay, and she never falsifies the characters on either side or overplays her hand. This is several notches above the usual Christmas story collection, and a boon for groups concerned with the meaning of the holiday.