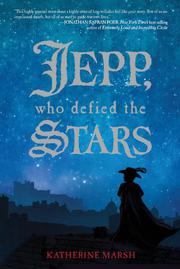 JEPP, WHO DEFIED THE STARS

Part coming-of-age novel and part paternity quest, this late-16th-century tale earns its distinction by virtue of its narrator: a dwarf.

Edgar Award–winning author Marsh (The Twilight Prisoner, 2009, etc.) has written a fast-paced adventure, abundant with period details, that comprises about two years of the diminutive Jepp’s life. Jepp’s account begins at a perilous point in his story—“imprisoned in [a] star-crossed coach, bumping up and down bone-rattling roads”—which leads to an exposition of the events that have brought him to this fate. Eventually his tale moves to a time beyond the hazardous coach journey and on to a satisfying, if overly contrived, ending. The book has three parts, loosely linked to three crucial northern European settings: the rural inn where Jepp was raised by a loving mother; the kingdom of Coudenberg, where he endures the luxurious but humiliating life of a court dwarf and is involved in a horrible tragedy; and the palace of Uraniborg, renowned for astronomical research, where Jepp’s status rises almost miraculously from pet dog to that of a respected scholar as well as a favored suitor for his beloved.

Despite the fact that the third part of the book pales in comparison to the first two, the honest and humorously self-deprecating voice of Jepp moves readers to rejoice with him as he seeks and manipulates his destiny.