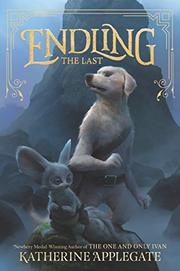 From the Endling series, volume 1

What do you do when you’re the last of your kind?

Applegate transports her readers to a new land, one inhabited by numerous sentient species, six of which have fought to the top of the food chain: humans, dairnes, felivets, natites, terramants, and raptidons. In this world, readers meet Byx, a dairne—a doglike creature that walks erect, glides like a flying squirrel, and has opposable thumbs—on the day she becomes the last of her species. It’s also a day when Byx meets two other creatures: Tobble, a wobbyk, with large ears and a short round body, and Khara (short for Kharassande), a 14-year-old, brown-skinned human girl who pretends to be a boy so that she is not limited by the gendered rules of human society. Bonded through lifesaving acts, the three embark on a journey to find Ferrucci the Gharri, a scientist and scholar who may be able to protect Byx from a human emperor who is hellbent on killing off her entire species. Applegate skillfully builds a fully realized world of intrigue and wonder without ever letting up on the story’s quick pace. Themes of genocide, conservation, and magic are interwoven, providing thought-provoking questions for astute readers and educators.

A savvy choice for readers of fantasy; individual readers and book clubs will love it and demand to know when the sequel will be available.