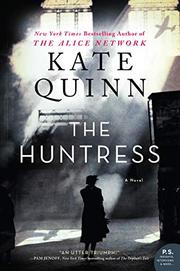 Nazi hunters team up with a former bomber pilot to bring a killer known as the Huntress to justice.

In postwar Europe, Ian, a British war correspondent with a vendetta, and his American sidekick, Tony, have set up a shoestring operation to catch the war criminals who seem to be not just slipping, but swarming through the cracks. The same set of circumstances that led Ian to enter a marriage of convenience with Nina, a Siberian former bomber pilot, has also given both common cause: to chase down Lorelei Vogt, a Nazi known as the Huntress, who, by her lakeside lair in Poland, trapped and killed refugees, many of them children. Lorelei’s mother, blandished by Tony, reveals that her daughter immigrated to Boston. Meanwhile, Jordan, an aspiring photographer living in Boston with her widowed antiques-dealer father, Dan, welcomes a new stepmother, Austrian refugee Anneliese, and her 4-year-old daughter, Ruth. Jordan soon grows suspicious of Dan’s new bride: A candid shot captures Anneliese’s furtive “cruel” glance—and there’s that swastika charm hidden in her wedding bouquet. However, Anneliese manages to quell Jordan’s suspicions by confessing part of the truth: that Ruth is not really her daughter but a war orphan. That Jordan’s suspicions are so easily allayed strains credulity, especially since the reader is almost immediately aware that Anneliese is the Huntress in disguise. The suspense lies in how long it’s going to take Ian and company to track her down and what the impact will be on Jordan and Ruth when they do. Well-researched and vivid segments are interspersed detailing Nina’s backstory as one of Russia’s sizable force of female combat pilots (dubbed The Night Witches by the Germans), establishing her as a fierce yet vulnerable antecedent to Lisbeth Salander. Quinn’s language is evocative of the period, and her characters are good literary company.

With any luck, the Nazi hunting will go on for a sequel or two.