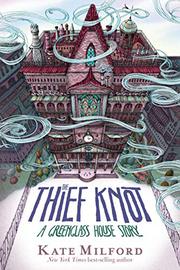 From the Greenglass House series

Another of Milford’s Nagspeake tales, brimful of intrigue, plucky wannabe adventurers, and some suspiciously artful iron.

Marzana Hakelbarend and Nialla Giddis are bored. Supremely bored. In the Liberty of Gammerbund, “the place where nothing happens,” they stake out even the most innocuous of interactions in hopes of uncovering some dastardly plot—alas, to no avail. A mysterious dinner guest from the city proper, however, upends the Hakelbarends’ tranquil domesticity with news that a mayoral candidate’s 11-year-old daughter has been kidnapped. Marzana’s parents don’t seem to consider the girl’s being held in Gammerbund a possibility, so Marzana, sick of being denied access to her parents’ pasts and (mis)adventures, decides to spearhead her own investigation with the help of an assembled six-kid band dubbed the Thief Knot. The offbeat, impassioned narration twists through uncertainties, anxieties, failures, and triumphs at a jaunty clip. Observant readers will delight in piecing together the clues to puzzle out the knots alongside the Knot as these well-drawn individuals grow from awkward semiacquaintances into a close, cohesive team. Colorful supporting characters further populate this complex world. A particular strength is Milford’s depiction of parent-child relationships; rather than taking the easy way out and making the parents dead, abusive, or absent, she makes them affectionate, invested enough in their children’s well-being to grow livid upon discovering they’ve been conspiring behind their backs to get involved in a dangerous crime. Marzana is biracial, with a pale mother and dark-skinned father; Nialla presents white; other characters are diverse.

A fascinating, intricate tale of friendship and rescue.