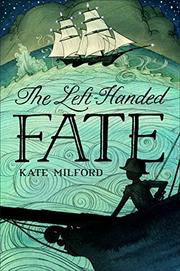 An ancient inscription and a handful of inscrutable artifacts plunge three young people into both the War of 1812 and a much larger, older conflict.

Opening in Baltimore then moving on to the not-entirely-earthly town of Nagspeake (setting, in another era, of Milford’s Greenglass House, 2014), the tale centers on staid, methodical “natural philosopher” Max Ault; 12-year-old American naval officer Oliver Dexter; and fiery Lucy Bluecrowne, daughter of a renowned British privateer, captain of the titular ship. It pits them against both relentless French pursuers and mysterious men in black with eldritch abilities. The prize is a three-part device made thousands of years ago and said to be able to stop war…a superweapon, or so everyone (nearly everyone) presumes. Along with being replete with rousing chases, races, and violent explosions, the tale is uncommonly rich in memorable characters, from the central three, who all display stout hearts and hidden depths, to Lucy’s 9-year-old half brother, part-Chinese Liao: pacifist, expert lockpick, and fireworks genius extraordinaire. The labyrinthine Nagspeake itself is magical and vivid enough to serve as more than just a setting (and deservedly sports a metafictional website). Wheeler’s neatly turned monochromes capture the tale’s warmth and wonder, though (at least as she depicts it) the cast appears to be white, excepting Liao.

Rich and strange of place and premise; suspenseful and thought-provoking.