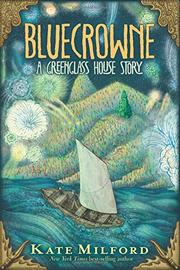 In this prequel to Milford’s Nagspeake tales, a privateer’s daughter takes on a ruthless time traveler who kidnaps her little brother.

Having been raised at sea aboard the Left-Handed Fate, 12-year-old Lucy is feeling marooned in the house her father, Capt. Bluecrowne, has built above the otherworldly town of Nagspeake for her, her half brother, Liao, and her beloved stepmother, Xiaoming. But hardly have the three moved in than Liao—already displaying a prodigious talent for constructing bombs and magical fireworks—is spirited away by Foulk Trigemine, a cold-eyed “roamer” sent to gather the boy up as a “conflagrationeer” for a man reputed to own some of Hell’s own coal. Foolishly, rather than use his kairos mechanism to return whence he came, Trigemine lingers in the town and era, scheming to snatch up other treasures. Unfortunately (for him), not only is Lucy willing to, literally, walk through fire to rescue her brother, but the lad’s vengeful mother turns out to be much more than she appears. Milford tucks strange places, odd artifacts, and people with mysterious pasts into a suspenseful tale properly supplied with sinister villains, clever twists, large explosions, and heartbreaking sacrifices. Along with the interracial family at the story’s center (Lucy and her father are white, while Liao and his mother are Chinese), black and Asian supporting characters add notes of diversity to the cast. Finished illustrations not seen.

A tale to sweep new and confirmed fans into the author’s distinctively imagined blend of history, magic, mythology, chemistry, and nautical lore.