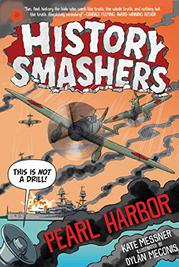 From the History Smashers series, volume 3

The third book in the History Smashers series offers readers more truths about an important event in history, weeding out tall tales they may inadvertently have absorbed through popular culture. In this installment, Messner challenges the belief that the attack on Pearl Harbor came out of nowhere. The author describes how Japan opened up to the outside world following an 1853 confrontation with Commodore Perry of the U.S. Navy, eventually militarizing and searching for foreign conquests. Next, she shows how, after years of colonialism, the U.S. had become largely isolationist, wary of entanglement in foreign countries and conflicts. Then, the background to the Second World War on both the European and Asian fronts is set, and the story of the attack on Pearl Harbor unfolds, shown to have occurred after a series of miscommunications and mistaken assumptions. The subsequent imprisonment of Japanese Americans is addressed, highlighting injustices perpetrated because of racism and fear. Presenting history through a blend of engaging narrative, graphics, black-and-white illustrations, and photos, Messner explains complex issues in a way that is accessible to young readers. Occasional text boxes provide helpful background information, such as about the history of Hawaii. Wartime contributions by African Americans, Native Americans, and Japanese Americans are described.

An intriguing read that will encourage children to question simplistic historical narratives.