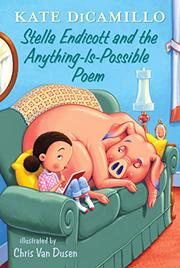 STELLA ENDICOTT AND THE ANYTHING-IS-POSSIBLE POEM

From the Tales from Deckawoo Drive series, volume 5

On the first day of second grade, Stella Endicott meets her new teacher, Ms. Tamar Calliope Liliana, whom she wants very much to impress—and so does the annoying boy at the desk next to hers.

During the second week of school, Stella’s class is assigned to write a poem that includes a metaphor. After school, Stella visits her friend Mercy Watson the pig. She cuddles up close to Mercy on the couch and begins to write. Stella eagerly writes about Mercy, the sound of the neighbor’s accordion, and leaves that fall balletically from the tree outside. She is so excited about her poem that when know-it-all Horace Broom asks if he can read it, Stella doesn’t hesitate to share. Horace immediately begins to pick it apart, scornfully informing her, “Pigs don’t sit on couches, they live on farms.” Angry, Stella loudly defends her poem. The two argue, and Ms. Liliana sends them to see Mr. Tinwiddie, the principal. It is this sentence that forces Stella to act using “courage” and “curiosity,” resources she draws on to encourage Horace, who is so afraid by the expected dressing-down that he runs out of the office and into more trouble than either of them thought possible. The academic setting, imaginative Stella, and brown-noser Horace combine for an ideal opportunity for DiCamillo to exercise her characteristic wordplay. Stella is biracial (black/white), Ms. Liliana appears black, and Horace presents white.

An adorable story that teaches readers that things—and people—are not always what they seem.