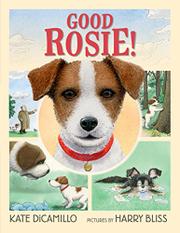 A lonely, brown-and-white terrier named Rosie learns how to stand up to a bully and how to make new friends in this understated, gently humorous story.

Rosie lives with her owner, George, a middle-aged, balding man with glasses and suspenders and a rather staid lifestyle. Though Rosie loves George, she would really like to meet another dog, so on their daily walks they begin visiting a dog park. At first Rosie doesn’t know how to make friends, but a tiny, bouncy dog named Fifi teaches Rosie and a blustery Saint Bernard named Maurice how it’s done. Rosie’s journey takes her from loneliness through fear and bravery and then on to joyous companionship with her new pals. By the conclusion, the three dogs are running and playing together, and George is chatting with two women on a park bench, making friends of his own. George is white, and two of the other dog owners are people of color. Each of the three dogs has a distinct personality, conveyed both in the succinct text and in engaging watercolor illustrations laid out in panels of different configurations as well as some full-page illustrations. Cartoonist Bliss’ humor shines as it works with DiCamillo’s understated text.

Subtle lessons about entering a new and unfamiliar territory, finding companions, and the value of a friendly, approachable attitude are all conveyed with a delicate touch. Good Rosie—good story.