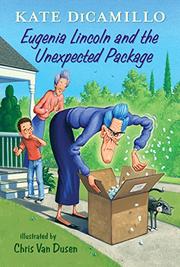 EUGENIA LINCOLN AND THE UNEXPECTED PACKAGE

From the Tales from Deckawoo Drive series, volume 4

Eugenia Lincoln is a sensible, no-nonsense, practical person. She does not have time for “poetry, geegaws, whoop-de-whoops, or frivolity,” and she definitely does not have time for oversize, unexpected packages. However, someone has sent Eugenia just that. It’s an accordion, and it has to go—she can’t think of anything more “frivolous, more geegaw-esque, more whoop-de-whoop-ish than an accordion.” The Blizzintrap Schmocker Company won’t take it back, so she makes a list of the choices before her: sell it, destroy it, or give it away. Can Eugenia be convinced to keep it—and that maybe there is music in her heart? Artwork shows what the text doesn’t: elderly Eugenia’s younger sister, “Baby,” is also an old white woman, and neighborhood kids Frank and Stella are black. The text is peppered with tough vocabulary for the more advanced independent readers in the intended age group, but the story also works well as a bedtime read-aloud for those not ready to tackle words and phrases such as “malevolent,” “obtuse,” or “diametrically opposed” on their own.

Eugenia’s need for routine and her intolerance of change and uncertainty will resonate with readers who experience life similarly.