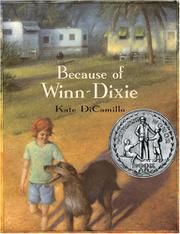 A 10-year old girl learns to adjust to a strange town, makes some fascinating friends, and fills the empty space in her heart thanks to a big old stray dog in this lyrical, moving, and enchanting book by a fresh new voice. India Opal’s mama left when she was only three, and her father, “the preacher,” is absorbed in his own loss and in the work of his new ministry at the Open-Arms Baptist Church of Naomi [Florida]. Enter Winn-Dixie, a dog who “looked like a big piece of old brown carpet that had been left out in the rain.” But, this dog had a grin “so big that it made him sneeze.” And, as Opal says, “It’s hard not to immediately fall in love with a dog who has a good sense of humor.” Because of Winn-Dixie, Opal meets Miss Franny Block, an elderly lady whose papa built her a library of her own when she was just a little girl and she’s been the librarian ever since. Then, there’s nearly blind Gloria Dump, who hangs the empty bottle wreckage of her past from the mistake tree in her back yard. And, Otis, oh yes, Otis, whose music charms the gerbils, rabbits, snakes and lizards he’s let out of their cages in the pet store. Brush strokes of magical realism elevate this beyond a simple story of friendship to a well-crafted tale of community and fellowship, of sweetness, sorrow and hope. And, it’s funny, too. A real gem. (Fiction. 9-12)