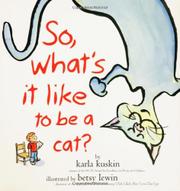 A boy interviews his cat in an exchange that illustrates Kuskin’s perfect apprehension of the feline psyche. When its questioner expresses some anxiety about dark corridors, the cat responds with utter scorn; with relish, it demonstrates both its sleeping and its leaping, explaining that “Sometimes a feline / must fly free.” The delightfully sinuous verse slides in and out of rhyming patterns, slipping extra syllables into the line, or shortening them as the cat explores its mercurial moods. Lewin’s illustrations lean toward the comic, presenting a character who is significantly goofier than it represents itself in the discussion. Her characteristic heavy black outline tends toward the lumpy, and the big yellow eyes give the cat a rather lunatic aspect. Regrettably, this disconnect between the illustrations and the verse does not sufficiently develop an ironic tension that could create picture-book synergy. One would wish for either a literal interpretation or a wholly over-the-top deconstruction of the cat as poseur. As it is, the result is a superficially pleasing but ultimately unsatisfying mismatch of word and image. (Picture book. 3-8)