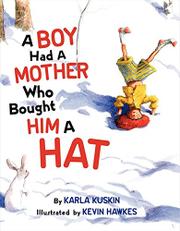 A BOY HAD A MOTHER WHO BOUGHT HIM A HAT

by Karla Kuskin and illustrated by Kevin Hawkes

Hawkes produces new illustrations to accompany Kuskin’s cumulative poem, originally published in 1976, which begins simply enough—a mother buys a boy a red, woolly hat. The story then unapologetically leaves logic behind, veering off on a nonsensical course directed by the need for the next rhyme and the desire for silliness. The boy won’t take off the hat, a fact that somehow prompts his mother to buy him a mouse, and some shoes, new boots, yellow skis, a Halloween mask and a cello. Finally, his mother buys an elephant, and it is at this point that the poet seems to lose control of the unwieldy cumulative rhyme with its long series of nested phrases and ends by having the boy lose his hat. The poet’s devoted fans will likely not be bothered by this, and they will enjoy the clever details added by the tongue-in-cheek illustrations, which, in deadpan fashion, pile on the accessories until the red-hatted boy sits astride his elephant, playing his cello and wearing skis. Look for grandma’s blue in-line skates! (Picture book. 3-8)