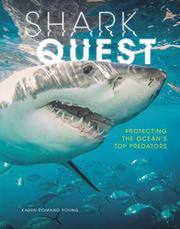 A remarkably thorough tour of the world of sharks and marine scientists’ efforts to educate the public about our ocean’s apex predators.

Misconceptions fueled by sensationalized attack stories in the media and limb-rending horror films have painted sharks as bloodthirsty villains of the sea, lying in wait for tasty, unsuspecting humans. As Young (Whale Quest, 2017, etc.) explains, however, humans—a fairly new addition to sharks’ world with our 6 million years on the planet being a mere blip compared to sharks’ 420 million—actually represent the single greatest threat to sharks’ continued existence through harmful practices like finning, commercial fishing, and pollution. This human threat is not a new topic for informational texts, and here is where so many books conclude, perhaps with a final call for action and touch of doom—but not so with this one. Instead, Young’s interweaving of dismantled misinformation and captivating “shark truths” seamlessly leads into the activities undertaken by researchers and conservationists to better understand and protect shark populations. Projects like SharkCam robots, fully mapping the shark genome, and citizen-driven tagging initiatives not only ground readers in real efforts that are happening right now to address the harm humans are doing, but also propel readers forward by showing how much remains unknown about these powerful creatures.

Rich information borders on overload, but passion cuts through the density.