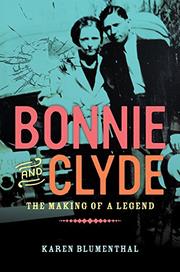 The Making of a Legend

A portrait of two victims of the Great Depression whose taste for guns and fast cars led to short careers in crime but longer ones as legends.

Blumenthal (Hillary Rodham Clinton, 2016, etc.) makes a determined effort to untangle a mare’s nest of conflicting eyewitness accounts, purple journalism, inaccurate police reports, and self-serving statements from relatives and cohorts of Bonnie Parker and Clyde Barrow. Though the results sometimes read as dry recitations of names and indistinguishable small towns, she makes perceptive guesses about what drove them and why they have become iconic figures, along with retracing their early lives, two-year crime spree, and subsequent transformations into doomed pop-culture antiheroes. She does not romanticize the duo—giving many of their murder victims faces through individual profiles, for instance, and describing wounds in grisly detail—but does convincingly argue that their crimes and characters (particularly Bonnie’s) were occasionally exaggerated. Blumenthal also wrenchingly portrays the desperation that their displaced, impoverished families must have felt while pointedly showing how an overtaxed, brutal legal system can turn petty offenders into violent ones. A full version of Bonnie’s homespun ballad “The Story of Bonnie and Clyde” and notes on the subsequent lives of significant relatives, accomplices, and lawmen join meaty lists of sources and interviews at the end.

Painstaking, judicious, and by no means exculpatory but with hints of sympathy.