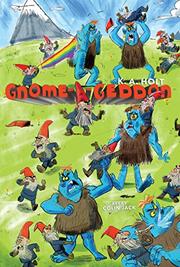 As the title indicates, a novel that attempts to subvert and poke fun at fantasy tropes.

A superfan of the series Triumphant Gnome Syndicate, Buck Rogers knows all the trivia. Buck, a white boy, and his friend Lizzie Adams, a multiracial (black/white) girl, eagerly await the midnight release of Gnome-A-Geddon, the series’ newest. Compounding the excitement, author Harold Macinaw makes a surprise appearance but then suddenly disappears. The next morning, Buck and Lizzie find replicas of themselves, and none of the adults can be woken. Possibly even more alarmingly, rows of children, including Buck’s little sister, Willy, march trancelike into a dumpster behind the bookstore. It turns out Flipside, the world of the books, is real. Using his comprehensive knowledge of the Triumphant Gnome Syndicate, Buck must find Macinaw and rescue Willy, but Flipside is more terrifying than he could have imagined. Like so many other fantasy protagonists, Buck is liberal with the snark, but some of the humor falls flat, as when he postulates that Lizzie might be part Troll because she’s multiracial. Lizzie never rises above the role of Buck’s sidekick, even though she reprimands Buck for not allowing her to fully participate in the adventure, and other characters do not rise above Buck’s preconceived notions of them.

In the end, the lampoon falls victim to its own sense of irony, making Buck feel like a secondary character in someone else’s story and not quite a protagonist in his own