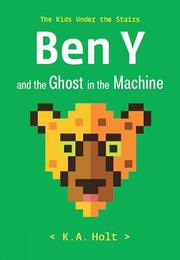 BEN Y AND THE GHOST IN THE MACHINE

From the Kids Under the Stairs series, volume 2

Holt’s follow-up to 2020’s Benbee and the Teacher Griefer follows another character from the ensemble cast. This entry focusing on Ben Y, who prefers Ben to the full name Benita and is exploring gender identity, is accessible without exposure to the prior volume; although it picks up without much explanation of past relationships, the strong narrative style does all the heavy lifting. Reeling from the death of a sibling and the subsequent social fallout of “dead-brother-itis,” Ben Y retreats deeper into friendships, game worlds, and the escape provided by the Newspaper Typing Club led by the trusted Ms. J. Over the summer, in this safe space for divergent learners, close bonds formed between Ben Y, Ben B, Jordan, and Javier. At school, Ben Y wavers between feeling unseen and being picked on and takes bold steps to carve out personal space, including an interest in newcomer Ace. Ben Y also faces challenges as the bullish principal imposes limits on their school paper and becomes invested in punishing dress-code violations. This focused character study delivers layered attention to grief and self-exploration. Multiple formats, including chat messages in the Minecraft-like Sandbox, combined with extraordinary pacing make this a win for reluctant readers, while the humor and emotional reach will draw in anyone interested in middle-grade emotional realism. With minimal physical descriptions, names cue ethnic diversity.