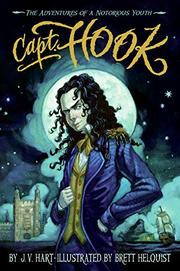 The Adventures of a Notorious Youth

In a first novel only tangentially related to the film Hook (1991), for which he wrote the screenplay, Hart casts the renowned villain as a strong-minded teenager undergoing some early formative experiences both on and off the playing fields of Eton. It’s actually two tales rammed together, passing without transition from a slang-thick, Tom Brown–style school story—“Topping swank good form, scugs!”—in which young James, a lord’s unacknowledged illegitimate son, repeatedly gets the better of brutal upperclassman Arthur Darling, to a brisk nautical adventure aboard the slave ship Sea Witch . Surrounded by a supporting cast of “lost men and boys” that features chubby, steadfast school chum “Jolly” Roger and a surprisingly canny Smee, James cuts a dashing, dangerous figure from first to last. He’s driven to violence by pride and anger rather than malice, and left at the end with a new moniker (but both hands), a newly liberated ship with which to search for the Neverland of his dreams and a yen for immortality. A thought-provoking character portrait, though modern readers will make heavy weather of the first part’s dated references and dialogue. (Fantasy. 11-13)