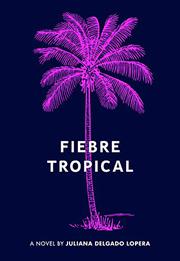 In U.S.–based Colombian author Delgado Lopera's coming-of-age novel, a 15-year-old Colombian girl struggles with her identity and her burgeoning sexuality.

Dragged unwillingly from Bogotá to Miami, crammed with her mother and sister into her grandmother's apartment at the Heather Glen Apartment Complex, Francisca misses her friends and her former life. But she can't go home, because "this wasn't a Choose Your Own Migration multiple-choice adventure." In a scene early in the book, her mother insists on baptizing a child she miscarried 17 years before, using a plastic doll from a discount store as a stand-in baby. Manic one moment and sad the next, Mami has joined the Iglesia Cristiana Jesucristo Redentor, an evangelical Colombian church in "a stinky room in the Hyatt Hotel nobody cared to vacuum." In the car on their way there, the doll stares at Francisca with a fixed, plastic smile. "Are you happy now, asshole, I wanted to say....You're still dead, pendejo." With a whip-smart, unapologetic voice peppered with Colombian slang, Francisca pulls us into her new life in "Yanquilandia." Trouble arises when she meets Carmen the pastor's daughter, who wants her to accept Jesus into her heart. Francisca imagines God in "a dentist's waiting room checking in with the receptionist every so often, Did Francisca receive my son in her heart yet? (said no God ever)." Instead, she finds herself falling in love with Carmen, threatening her family's tenuous place in the immigrant community. Though the plot revolves around a coming-out story, the great strength of Delgado Lopera's writing lies in its layered portrayals of these characters and their world. "Women in my family possessed a sixth sense...from the close policing of our sadness: Your tristeza wasn't yours, it was part of the larger collective female sadness jar to which we all contributed."