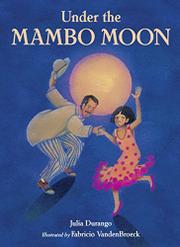 UNDER THE MAMBO MOON

Durango’s ambitious, inventive poetry collection on Latino music and dance covers an enticing subject but ultimately tries to do too much.

During the summer, Marisol helps her father run his music store. This store attracts a plethora of Latino characters, many of whom long for the music of their home countries. Marisol’s first-person free-verse poem frames 14 one-page poems, each titled after different characters. The book alternates between Marisol’s evening at the store and these other poems, which appear in duos and trios until Marisol’s own verse on the title mambo ends the collection. VandenBroeck’s illustrations also rotate, from black and white for the frame narrative to color (replete with grinning, rosy-cheeked characters) for the individual poems. The shorter verses vary in style and length, including free verse, rhymed and concrete poems. Musical styles range from mariachi to vallenato, while the dances cover everything from the cha-cha-cha [sic] to the tango. Adding to the wave of characters, musical styles and dances are Spanish words with few, if any, textual clues, although the author does discuss each style briefly at the book’s end. While a few poems allude to the tumultuous backgrounds of some of the styles, the author’s note glosses over colonization and slavery in Latin American history.

Despite a few good poems and the much-needed subject matter, the end result lacks cohesion.