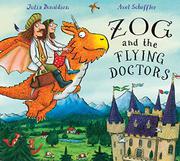 ZOG AND THE FLYING DOCTORS

Dynamic duo Donaldson and Scheffler (Superworm, 2014, etc.) are back with a tale full of high drama, medical emergencies, and dragon crash landings in this sequel to A Gold Star for Zog (2012).

In this outing, the pair reintroduces readers to the trio of traveling doctors: Gadabout the Great is an expert surgeon, Pearl has the distinction of being both a princess and a physician, and dragon Zog is a fire-breathing ambulance—albeit one that has some trouble with his landings. Flying from kingdom to kingdom and curing the maladies of the magical and nonmagical hoi polloi, the threesome passes Pearl’s uncle’s castle and decides to make a social call. Unfortunately, Pearl’s kingly uncle does not approve of a princess with outside employment. In a page turn, Pearl is transformed from medico to captive in a frilly dress, forced to embroider cushions and arrange flowers. As Gadabout and Zog try to save their friend, the king becomes ill with an unknown ailment. Teamwork saves the day (and cures the king of his misogynist attitude) thanks to Pearl’s medical research and Gadabout’s and Zog’s abilities to gather healing ingredients from past patients. Donaldson’s rhyme scheme is sharp, and fans will immediately recognize Scheffler’s distinctive style. Zog steals the show every time he quietly recovers from his bang-crash-thump landings in the background. The message is noble, but the lack of diversity—all the characters are white—tarnishes the crown.

A solid storytime and lap-read that will amuse with each repeated read.