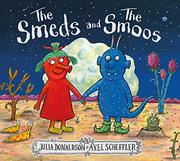 THE SMEDS AND THE SMOOS

This tale of prejudiced extraterrestrials jumps immediately into rollicking verse. “By a loobular lake on a far-off planet / There lived a young Smed, / and her name was Janet. / Not far away, on a humplety hill, / There lived a young Smoo / by the name of Bill.” The patter and nonsense words (wurpular, trockle) invoke Dr. Seuss. Smeds and Smoos alike have antennae and tubular noses, but Smeds, red, have webbed feet they wear bare while Smoos, blue, sport elflike boots. The illustrations’ eye-catching colors are intensely saturated throughout, sometimes jarringly so. Despite parallel contemptuous commands to “Never, never play with” the other group, Janet and Bill secretly bond and grow up to marry. “Janet and Bill stole out that night / While their families slept / and the squoon shone bright. / They clambered into the Smeds’ red rocket. / (Grandfather Sned had forgotten to lock it.) / Bill pressed the button, and Janet steered… // …When their families woke, they had both disappeared!” A multiplanet search leads to reconciliation and integration. This unsubtle metaphor for fixing racism and xenophobia ignores real-world power imbalances: The Smeds and Smoos may distrust one another, but they share equal status. Moreover, the notion that interracial couples and mixed-race offspring—a purple Smed/Smoo baby—are a solution for racism is false and places an unfair burden on mixed-race readers.