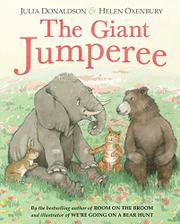 Rabbit, Cat, Bear, and Elephant are afraid of a voice coming out of Rabbit’s burrow, but Mama Frog solves the mystery.

“Rabbit was hopping home one day when he heard a loud voice…: ‘I’m the GIANT JUMPEREE and I’m scary as can be!’ ” A gentle, pastel-hued watercolor setting lies behind the upright, taken-aback Rabbit on verso and the grassy entrance to his burrow on recto. When Rabbit cries for help, Cat (a female) volunteers to “slink inside and pounce”—until the voice calls out again, repeating “I’m the GIANT JUMPEREE and I’ll squash you like a flea!” As each of the aforementioned animals goes to the next one for help, they all stay near the burrow, anxiously awaiting the appearance of the voice’s mysterious owner, which issues a different rhyming threat with each new encounter. Mama Frog uses a technique that many preschoolers will recognize: she counts to three to make the Giant Jumperee leave Rabbit’s burrow. The gleeful, unrepentant culprit is sure to make children giggle—then pause with Mama Frog’s response. The text’s tone, plot, and repetitions are perfect for the youngest readers. The artwork is a masterful match, with humorous, exquisitely rendered body language and facial expressions. Each time there is tension, the art and text of the following page relieves it. The final, wordless double-page spread is a joyous affirmation of life and friendship.