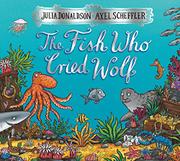 THE FISH WHO CRIED WOLF

A surprise ending and an undersea setting update this classic. The only big thing about little Tiddler is his imagination: Each day he dreams up a new tale to explain his tardiness. The other students call him on his outrageous fibs, but Little Johnny Dory loves Tiddler’s stories and passes them on to his granny, who then tells them to her friends. But one day Tiddler has a real adventure and gets lost in the big ocean until he overhears a familiar story about the exploits of a fish named Tiddler. He follows his own stories from one sea creature to another, until he is back in familiar waters. And do his classmates believe this tale? Of course not. But Little Johnny Dory does. “He told it to a writer friend . . . who wrote it down for you.” Tiddler’s underwater world comes to life through Scheffler’s highly saturated, detailed illustrations, which give his fish real personality while preserving their resemblance to their natural counterparts. Clever. (Picture book. 3-7)