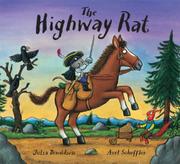 With a tale that shares more ground with tales of Robin Hood and the Three Billy Goats Gruff than its inspiration, Alfred Noyes’ “The Highwayman,” Donaldson and Scheffler deliver a lot of laughs.

With a rhyming cadence evoking the hoofbeat pattern of Noyes’ rhythmic verse, Donaldson introduces an anthropomorphic, thieving rat on horseback who steals food from all he encounters. He wants sweets but still takes clover from a passing rabbit, nuts from a squirrel and even a leaf from a line of ants. He grows fat while they starve, until a duck comes along. The rat threatens to eat her since she carries no food, but taking a cue from the Billy Goats Gruff, she sends him in search of her sister, who supposedly has a hoard of “biscuits and buns aplenty” hidden in a cave. Led there, he calls into the cave, mistaking the echo as the sister’s response with a list of goodies. When he goes to find the treats, the crafty duck channels Robin Hood to steal back his saddlebags of food for the other animals, leaving the rat to wander blindly through the dark cave. Throughout, humorous illustrations obscure any sense of danger in the story, instead provoking pleasure. In an ending that matches the entire book’s comic tone, the rat secures a job cleaning a bakery, leaving the others free of his thieving ways.