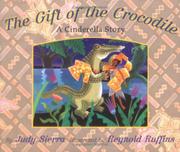 THE GIFT OF THE CROCODILE

A reptilian “fairy godmother” provides more than fine clothing for this Indonesian Cinderella. Beguiled by a widowed neighbor’s gift, young Damura persuades her father to remarry. Subsequently forced into servitude, her distress draws an ancient crocodile—who, because she behaves with proper respect, not only furnishes her with lovely sarongs, but brings her back to life after her stepmother and stepsister feed her to another crocodile. Ruffins (Running the Road to ABC, 1996, Coretta Scott King Honor) sets long-limbed, colorfully clad figures into bright, open tropical settings, ably capturing Damura’s sadness, her stepsister’s disagreeable nature, even the crocodile’s solicitude with clearly drawn expressions and body language. Sierra tells the tale simply and fluidly, closing with a note on her source (a Dutch collection of Spice Island folktales), and on Cinderella tales in general. The story itself follows a familiar track, even to the lost slipper, but the exotic setting, plus several humorous touches, set it apart from the rest of this year’s crowd. (Picture book/folk tale. 6-9)