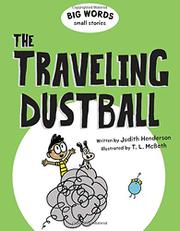 Bespectacled Davey is sweeping under the couch. When he enlists his dog’s grudging help to dispose of a sizable dustball, a gust of wind takes the two up, up, and away on a grand adventure to Italy, Hawaii, China, and Switzerland. Along with sending the pair to a new location, each chapter also introduces a “big word,” such as “irksome,” “brouhaha,” “lollygagging,” “collywobbles,” and “phenomenon.” As in series opener The Missing Donut (2018), colorful beings called Sprinklers pop in to alert the reader before any “big word” is introduced (“Big word coming. BIG!”). Their leader, the Sprinkle Fairy, adds idiom-filled commentary. The repetitive formula, which smartly deviates in the final chapter to combine all the “big words” into a humorous skit, will indeed introduce readers who have some confidence already to new words. The quirky cartoon illustrations have ample white space, but readers unfamiliar with comics conventions may find the layout hard to follow without panels and speech bubbles. Additionally, the globe-trotting sequences rely on visual stereotypes to convey the locations (for example, the Swiss characters wear lederhosen and dirndls, and the Italians carry plates of spaghetti and meatballs; the depiction of an elderly Chinese man avoids facial stereotypes, however). Davey has brown skin and black hair; the Sprinkle Fairy presents white.

A dustball of fun for fairly fluent readers.