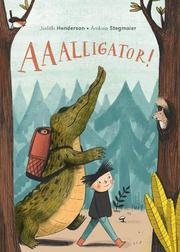 When a boy befriends an alligator, it becomes a problem for the whole town.

What starts as a pleasantly routine walk in the woods turns into a surprising friendship after “the boy,” as he’s consistently called, frees an alligator caught in thick vines. When the mayor declares a ban on alligators, the townspeople rally in secret to find a way to feed and take care of the alligator, going so far as to protect him by hiding him in plain sight. Henderson’s sweet story about a boy saving his friend has a subtle political subtext, as the people find a way to do what’s right even when led by an ineffective, unworthy elected official. There is much to harvest from Stegmaier’s illustrations. The palette of muted earth tones helps connect the worlds of both the alligator and the boy. There are lovely elements of foreshadowing, like the guitar that the boy plays to lull the alligator to sleep appearing pages before its use, sticking out of his backpack. In addition, there are recurring details, like nods to the boy’s love of birds, that readers will enjoy finding. The boy has pale skin and stick-straight black hair, and the mayor is White, looking rather like a beardless Abraham Lincoln. Townspeople are depicted as racially diverse; one uses a wheelchair.

The trope of the unlikely friendship delivered with a traditional feel and a modern message.