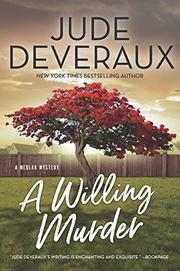 The mystery debut of bestselling romance author Deveraux (As You Wish, 2018, etc.) starts with an unhappily-ever-after—an unsolved murder. But its heroine, a romance novelist, has a better ending in mind.

After purchasing a house in her hometown of Lachlan, Florida, Sara Medlar makes a gruesome discovery in her yard. Buried beneath a poinciana tree with flaming red leaves are the skeletons of a mother and daughter. Sara’s housemate, Jackson “Jack” Wyatt, knew the victims well. Cheryl Morris skipped town 20 years ago, just after her 16th birthday, presumably with her mother. Although Jack was younger, the two were friends, and he knew she aspired to be a television journalist, not a runaway. But Cheryl’s mother was believed to be a prostitute, which was why only Jack questioned the family’s disappearance. Jack is now a construction worker and the grandson Sara wished she’d had with his late grandfather, who married someone else. He’s haunted by the car accident that killed his half brother and left him on crutches. Meanwhile, Sara’s niece, realtor Kate Medlar, has joined Sara in Lachlan to learn more about her late father. Kate and Jack fight like siblings, but there’s room for romance in future books. For now, Sara, Kate, and Jack form a trio of unlikely sleuths, using Sara’s fame as an author and the house’s notoriety as a crime scene to pump the locals for more information. Although the story’s tone is dark, Deveraux’s signature humor often peeks through, especially when the sheriff points out all the ways the trio’s meddling has jeopardized the case.

Fans of Deveraux and the cozy mystery genre will find common ground in this twisted tale of forgotten graves, small-town grudges, and new friends.