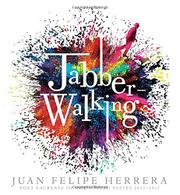 In the spirit of Alice’s madcap adventure down the rabbit hole, this stream-of-consciousness, metafictive exploration of the poetic process dips in and out of imagined reality as easily as the Cheshire Cat winks in and out of sight.

Herrera, a former United States Poet Laureate, launches with an exhortation to “Slide on your Jabber Booots!” Taking writing pad in hand, “You have to move fast!” if “Your burbles are going to become a / Seismic & Crazy Epic Poem!” Herrera’s rules for Jabberwalking-poets-in-waiting are simple: 1) “You do not have to know where you are going! / Or what you are saying!” 2) “move!” 3) “SCRIBBLE your burbles, your words of things…Jabber!” In this topsy-turvy vision, the brain is really a burrito that spews cosmos-changing revelations to anyone paying attention. “After four hours of nonstop Jabberwriting… / YOU! In four hours—will have an… / ALMOST-BOOK!” The challenge is to interpret the resulting scribbled “burbles,” but fear not, the challenge isn’t really a challenge because no one is expected to “understand” or “decipher.” A Jabberwalker’s sole directive is to create something that’s not a “typical poem!” Between looking for the narrator's dog, Lotus, flying to the Library of Congress, landing on the word planet Pluto, and meeting a couple of Jabberbloggers, Jabberwalkers everywhere will have hopped, flown, and leapt through shape-changing exultations that have freed their “Mind-Brains.” In the right hands, all the wacky assignments and Herrera’s autobiographical “Jabber Notebook” entries will ultimately spawn incandescent thinkers who will leap to the “flamey / Stars!”—or so Herrera hopes.