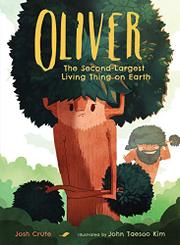 The Second-Largest Living Thing on Earth

Oliver, a giant sequoia tree, works hard but unsuccessfully to become the largest living thing on Earth, until he realizes that he is part of something even larger.

Crute and Kim, debut creators, find a standout way to impart an important life lesson about winning and losing. Using as a springboard the facts that a giant sequoia named Gen. Sherman is identified by Sequoia National Park as the largest living tree in the world, by volume, and there are other tall and named trees in Sequoia National Forest, they offer a gentle fantasy in which the second-largest tree, whom they call Oliver, eats well and lifts weight in an effort to grow taller and stronger and thus earn a sign like Sherman’s, but it remains in second place. He looks sadly around and sees his impressive, only slightly shorter, neighbors and realizes that they are all part of “something larger”: a forest (that also has a sign). Clean design extends to sans-serif font and digital illustrations often set on white or pale green space. Only the named trees have detail—arms, expressive faces, and bushy green leaves for hair and beards. The faces of human admirers have varying skin tones. A final page offers other examples of “second-largest things on Earth”—a national park, a country, a state, a mountain, an ocean, and a whale species—and identifies the actual “largest living thing on earth” as a fungus in Oregon.

A gentle reminder that runners-up are important, too.