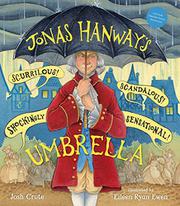 Umbrellas are considered perfectly acceptable and commonplace today, but in the 1750s in England—where “On some days, it drizzled. On others, it muzzled. On others, it pelted and showered and spat”—they were considered foolish and ridiculous. “It’s not what we do,” the people of London said, until a man named Jonas Hanway was inspired to keep dry by taking a stand and pulling out his own umbrella, much to the consternation of those around him. Lively and colorful watercolors combine with bouncing onomatopoeia and other wordplay to show the cranky Hanway, a man who disliked change yet hated rain so much he traveled around the world in search of a place where it didn’t exist. When he sees umbrellas in action in Persia, he falls in love. His use of the seemingly frivolous object eventually causes its adoption into genteel English society. This deceptively simple historical selection lightly touches on originality, innovation, xenophobia, and cultural sharing and change while explaining how perception and reality can conflict. In the 18th-century scenes, characters are depicted as white in England and with brown skin in Persia, but a scene of modern London is appropriately diverse (and rainy). Endnotes include a brief history of the umbrella.

Both a bubbly historical account of umbrellas and a lighthearted tale of embracing change.