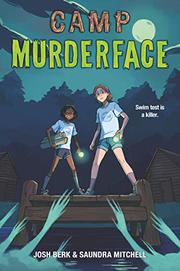 From the Camp Murderface series, volume 1

Two kids team up to unravel a sinister, supernatural summer-camp mystery in 1983.

Corryn’s at Camp Sweetwater while her parents work on the divorce they think she doesn’t know about. She bonds with Tez when they see eerie faces in the bonfire after a strange stick is added to it during their first night there. In their alternating first-person, present-tense narration, scares come fast and furious, with only the duo seeing (or, at least, acknowledging) that something’s wrong. As the scares grow into physical dangers, action-oriented Corryn and scientifically minded Tez unearth the history of the camp. In a neat subversion of an oft-used trope, they learn that in the 1700s, the lake was cursed by the actions of a nefarious French trapper, leading the resident Miami Nation to abandon the area. Since the 1880s, the summer camp has opened and closed in 20-year cycles marked by disappearances—the first being the three girls whose faces the duo saw in the fire. Tez faces extra risks in physical scenes, as he has Marfan syndrome—only the staff knows; he’s enjoying having his peers treat him like a “regular kid.” Corryn presents white, and Tez is biracial, identifying as “half Chamorro” (his father is from Guam); other campers are diverse. While the main storyline resolves, a tantalizing ending suggests there are more chills to come in a planned sequel.