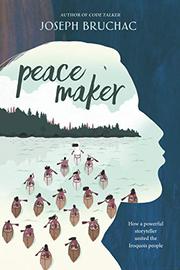 Bruchac takes readers to the dawn of the Iroquois Confederacy.

Weary of continued war under the warrior chief Atatarho, Okwaho’s family and a few others have made the decision to leave the big village of the Onontaka. But despite their decision to live peacefully apart, they cannot seem to escape the continued warfare among the five nations in the region: Okwaho’s best friend, Tawis, is kidnapped by the Standing Stone warriors of the Oneida while the pair is fishing for trout. Hoping to return to the protection of the big village, Okwaho’s community sends a delegation to negotiate with Atatarho, Okwaho sneaking after to watch and witnessing the chief’s promise of more fighting and death. Then a man called Carries, from the Ganiekehgaono Nation, arrives in Okwaho’s tiny village to tell them stories of a Peacemaker who will come to confront Atatarho. Basing his tale on the real-life story of the forming of the Iroquois Confederacy, as told to him by Haudenosaunee elders, Bruchac relates it through the eyes of Okwaho. This is a vital story to tell, but by positioning Okwaho primarily as an observer, he hobbles the development of a dynamic protagonist. Still, readers who persist to hear the nested stories told by Carries and Okwaho’s clan elders will come away with a new understanding of this moment in history.

An important story told too remotely to connect.