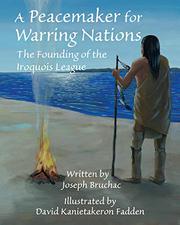 A PEACEMAKER FOR WARRING NATIONS

The Founding of the Iroquois League

An account of the origins of American democracy via the Haudenosaunee League, also known as the Iroquois Confederacy.

This inspiring picture book for upper-elementary–age kids recounts the founding of the Haudenosaunee League, centuries before the United States became a nation, by a man known as the Peacemaker. In a time of violence and war, a child is conceived without a father and born to a single mother. His grandmother is baffled until one night a stranger appears by her bed to explain that the child has been sent as a prophet to heal nations. On one level, Bruchac’s (Nulhegan Abenaki) tale is a great introduction to archetypes, as the legendary Peacemaker is identifiable in many ways. He is challenged by nonbelievers and tested by feats of faith, and his followers must sacrifice to step onto the righteous path. Returning from death, he achieves what no man has done before, convincing the Mohawk, Onondaga, Cayuga, Seneca, and Oneida people to set their weapons down and work together. On another level, it fills a gap in U.S.–history education, revealing how Benjamin Franklin was inspired by the Haudenosaunee League’s representative form of government. With a group of headwomen as advisers and a long house to represent the peoples’ dependence on one another, the League’s council fire burns bright as a symbol of democratic unity. Fadden (Akwesasne Mohawk) contributes dramatic paintings that bring to life this moment in pre-colonial history. With a useful bibliography, as well as a preface and author’s note that speak to the contemporary inspiration for the book, this story should be on all shelves.

A timely, must-read tale about overcoming divisions as a nation.