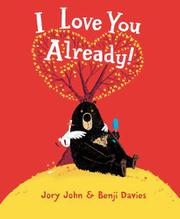 I LOVE YOU ALREADY!

From the Goodnight Already! series

Duck and Bear, the early bird/night owl opposites from Goodnight Already! (2014), are back, and this time the pair are the textbook definitions of extrovert and introvert.

Just as Bear settles in for a wonderful day in his cozy chair, tea, journal, and books beside him, Duck knocks at his door to take him on a walk, whether he wants to go or not. Saying he’s busy, hiding behind a chair, and repeatedly saying “No” to Duck’s many suggestions of activities all fail. Introverts will just shake their heads at Duck’s response: “You don’t look  busy!” The pattern continues throughout the walk, Duck bringing things up, Bear responding honestly, Duck repeating himself, and Bear continually telling Duck that he already likes/loves him. Doubting Duck doesn’t get the message, though, until he falls out of a tree and Bear expresses his concern. And though he may realize that Bear loves him already, he never gets that Bear just wants some time alone. The exasperated Bear and frenetic Duck, with their delightful and easily recognizable facial expressions and gestures, can certainly be milked for a few laughs, but they are basically the same laughs as in their last outing.

Rather one-note; storytime may be lively with all the repeated phrases, but the story’s not likely to garner many rereads.