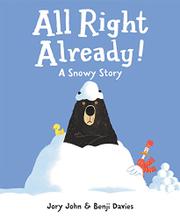 From the Goodnight Already! series

Poor, beleaguered Bear must put up with his neighbor Duck’s over-the-top excitement when it snows overnight.

Those familiar with the Goodnight Already! series know that Bear and Duck have previously weathered differences in sleep patterns, activity choices, and some time apart. This time, Extrovert (with a capital E) Duck is thrilled to wake to new snowfall. The first thing Duck does is run to tell Bear, who is in the bath, and cajole him into enjoying the snow together. Introvert (with a capital I) Bear is interested only in drying off. But Duck won’t be put off. “No” is Bear’s answer to every activity suggestion Duck poses, but Duck insists on sledding and snow angels and a snowball fight. Hilariously, Bear is wearing only a yellow and orange polka-dot towel around his waist and a tiny shower cap atop his head; Duck didn’t even let him dry off, which is why his sudden sneeze is no surprise. Duck’s ministrations are the final straw for Bear: “Out! Now!” Duck’s own sneeze leads to a subtle (not!) message for Bear begging for some TLC. Bear is almost a slapstick character in Davies’ illustrations, and Duck is a whirlwind of energy. As in many recent introvert/extrovert books, it’s the introvert who gives in to make the peace: Bear, still sick, comes and tends Duck, though unwillingly. Moreover, the joke simply feels old in this fourth iteration.

Extroverts may appreciate the validation, but this series is losing its freshness for everyone else.