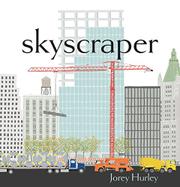 Follow along as machines construct a skyscraper, from the ground all the way up, up, up!

In her punchy trademark one-verb-per-page style, Hurley starts off with a demolition followed by the numerous steps of building an enormous new skyscraper. Watch the excavator “dig” the foundation, the flatbed truck “haul” the beams for a crane to “raise,” and more, all the way through to the finishing touches of windows and paving. Near the last page, a change from landscape to portrait orientation finally treats readers to a complete view of the towering finished product. Occasionally, scale is difficult to ascertain in the illustrations, making it hard to perceive the building’s upward progression, though changing seasons nicely underscore that completing a project this large is a lengthy process. On each page, a new construction vehicle lumbers in, ranging from the familiar (bulldozer) to the lesser known (pile driver). The closing glossary identifying the equipment and its function will help readers connect the verbs to the machines’ tasks. The flat, digitally rendered construction vehicles, depicted in comparatively bright primary colors, stand out distinctively against the matte, mostly gray background, though the imposing vehicles feel more static than dynamic.

The big machines may initially draw readers, but kids will leave with a solid foundation about the immensity of large-scale construction.