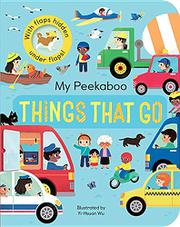 MY PEEKABOO THINGS THAT GO

Flaps within flaps offer fun and occasional frustration in this highly interactive, travel-themed tome for tots.

Several two-page set pieces depict a variety of conveyances and heavy equipment in action, in tableaux depicting a city, harbor, airport, building site, railway station, and freeway. Scenes are dense with detail, especially as readers begin opening the many flaps built into the illustrations, affording peeks inside vehicles, buildings, boxes, and baskets as well as behind clouds and below the sea, for example. Vignettes are introduced in rhyme: “This town is busy—everyone is on the go. How many vehicles do you know?” In addition to the obvious—a bike, bus, taxi, police car, and van—a cloud-shaped flap reveals an airplane, and one on the van folds back to show the scooter inside. A flap on a building reveals a woman on an exercise bike; a door beyond her conceals a person watching a televised stock-car race in the next room. With more than 70 flaps and a multitude of details, random facts, and vocabulary, this is a potentially longer read than most board books. The art is simple, cartoonish, and unambiguously representational; humans depicted represent a range of races, ages, genders, and abilities. The book is sturdy and the pages thick, but the flaps can be tough to operate, especially on first opening, and some will likely rip over time. Companion title My Peekaboo Farm publishes simultaneously.

Won’t last forever, but hours of entertainment while it does.