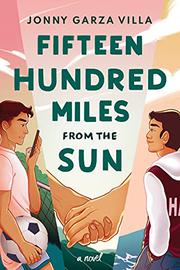 FIFTEEN HUNDRED MILES FROM THE SUN

Julián “Jules” Luna is a closeted junior who is about to have his life turned upside down.

Set on leaving Texas to go to UCLA, Mexican American Jules is betting that moving 1,500 miles away will allow him the space to finally come out. Despite being surrounded by fiercely loving friends, he has accepted the duality of his closeted life, which he keeps under wraps to avoid his homophobic father’s verbal and physical abuse. When a drunken night leads to his accidentally coming out on Twitter, he is catapulted into an out life, which—amazingly—includes a blossoming relationship with Mat, a Vietnamese American boy and online crush who happens to live in Los Angeles. Garza Villa’s debut is buoyed by tenderness and humor amid moments of deep pain. The gay romance certainly delivers in Jules and Mat’s adorable chemistry, but the real standout is the love story between Jules and his (mostly Latinx) friends as they live life to its fullest together, standing on the precipice of new beginnings before leaving for college. Jules’ friendship with Jordan, his straight, Black soccer teammate, is exceptionally moving in the boys’ mutual care and vulnerability. The delightfully sassy Spanglish with myriad pop-culture references seamlessly woven into the conversational prose is an added bonus.

An open-hearted expression of love in its many forms.