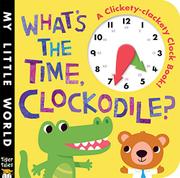 Hey kids! Learn how to read an analog clock just like your (grand)parents!

A big, round hole cut into the front cover and every subsequent heavy cardboard page reveals a clock face with hours marked in Arabic numerals; the minutes are marked likewise but only by increments of five. The two ratcheted plastic hands can be individually set according to prompts delivered by a bear and the titular crocodile, evidently roommates. They rise in the crowded, flat cartoon illustrations at “7 o’clock” (“If the long hand points straight up to 12, the time is a whole hour,” Clockodile informs the bear). Improbably, they get set to retire at “25 after 7” that night. In between, they catch a bus, paint some pictures (at “half past 9”), eat lunch, swim (at “quarter after 2”) and share dinner. Meanwhile, an inconspicuous printed clock in each scene provides the proper configuration of hands, and a small blue robot helpfully supplies the “digital time” equivalents on a band running along the bottom. Explanations of seconds, minutes other than those divisible by five, Roman numerals and alternative expressions (“nine thirty,” “two fifteen,” etc.) are evidently reserved for another time.

A rudimentary introduction to a classic skill. Up next: how to dial a phone, play CDs, use a film camera….