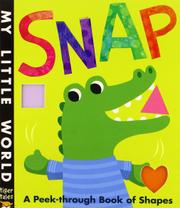 A Peek-through Book of Opposites

Bright, bold images of animals accompany rhyming couplets. For example: “Dolphin dives into the sea / and spots a spinning star. / Now try to find another one. / Look closely. It’s not far!” The illustrations feature a dolphin and starfish on the left and an assortment of sea creatures with different shapes for the bodies, including a die-cut star, on the right. These cutouts neatly serve to reinforce the concepts being presented. The “Peek-through” device is not nearly so successful in companion title Tall and Short, which illustrates some basic opposites such as big/small, fast/slow and hot/cold: “Giraffe is tall,” and “Dog is short,” for example, or “Elephants are trumpeting: young and old.” The images are appealing, and they successfully convey the concepts presented. However, here the die cuts are a distraction at best and confusing at worst, since the cutouts are apparently arbitrary shapes and colors, entirely unrelated to the concepts presented.

While this title is a strong choice for learning about shapes, there are better options for opposites than its companion