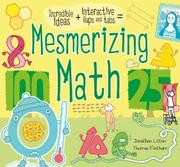 This lightning-quick overview of select mathematical topics doesn’t add up to anything useful.

The jumbles of cartoon images—many with flaps or, less often, a spinner or other add-on—begin on a hard-to-follow contents map. They then continue in successive single spreads to illustrate surveys of numbers, geometry, probability, mathematical transformations, measurement, statistics and numerical sequences. Skipping such basics as addition and subtraction, Litton immediately plunges into squares and square roots, primes and powers, negative numbers, triangular numbers, zero, infinity, fractions, percentages and decimals in a dizzying whirl that will quickly leave math tyros behind. On the other hand, even budding math geeks won’t bring much away from his simplistic claim that “[m]ost numbers can be broken down into smaller numbers called factors” or a description of decimal places without clear examples. The discourse is likewise overcompressed on subsequent pages, ending with an array of sequences ranging from Fibonacci numbers and Pascal’s triangle to how many times a 16-square length of toilet paper can be folded in half. That isn’t the only case of mission creep, as glances elsewhere at optical illusions and at the hazards of slanted survey questions demonstrate. Furthermore, two punch-out models make this problematic for libraries.

Infectiously enthusiastic but more elementary of look than content, with a hard-to-determine audience.