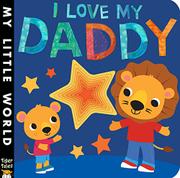 I LOVE MY DADDY

Dads are given gold stars by their young.

Fathers and all the great things they do are at the center of this board book. Each double-page spread features an anthropomorphic animal giving its father a gold star. Each illustration is narrated in a rhyming couplet from the point of view of the child. For example, "Daddy Cheetah, you're so fast—Hooray! You won the race! / Here's a star to celebrate your super-speedy pace!" The illustrations are composed with the round figures and deep colors Galloway specializes in. Each spread incorporates a die-cut star that’s immediately under and a little smaller than the one in the previous spread, making a progressively recessed tactile feature. The fixed placement of the cutout makes it a little difficult to decode exactly who is giving whom the star; although the text indicates that the child penguin is giving Daddy Penguin a sweater with a star on it, it looks as though the exchange might be going in the opposite direction. A similar title, I Love My Mommy, is concurrently published and features similar scenarios in which moms get similarly die-cut flowers from their kids instead of stars.

It's a cute idea and an obvious choice for a nice Mother’s or Father’s Day present for new parents, but neither title is memorable enough to become a storytime staple