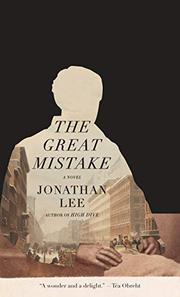 An exceptional work of historical fiction about one of the key figures in the development of 19th-century New York City.

In November 1903, on Friday the 13th, Andrew Haswell Green was shot dead in front of his Park Avenue home. Largely forgotten now, he had been essential to the establishment of many of the city’s parks, museums, and bridges and to the linking of its five boroughs into Greater New York. As he did in High Dive (2016), Lee sets up two narratives: one following highlights of Green’s life up to the murder and one on the police investigation afterward. Born in 1820 into a Massachusetts farming family, young Green realizes that he doesn’t grip an ax the right way, that he has “no interest in girls.” At 14, he is seen almost kissing another boy. (Present-day readers may find the allusions to his sexuality euphemistic or otherwise indirect, but that is period appropriate and could mean the historical record lacks more-explicit references.) Shortly after that incident, Green is sent to New York to work in a general store, where future New York Gov. Samuel Tilden appears one day seeking pills for indigestion. They develop a lifelong friendship that will lead to Green’s many civic achievements. Meanwhile, a police inspector stumbles on a clue to the shooting after visiting a bordello whose madam is linked to the case. She provides one of the book’s most colorful sections (and its only significant female character), and she and the inspector dominate the novel’s lighter moments. There also are two very different strands of suspense: in the whodunit, which hinges on an accepted haven for straight male urges, and in the biography, with its question of how a man deals with feelings that don’t fit into the conventional narrative of the time.

A highly satisfying mix of mystery and character portrait, revealing the constrained heart beneath the public carapace.