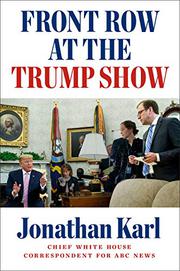 FRONT ROW AT THE TRUMP SHOW

The chief White House and Washington correspondent for ABC provides a ringside seat to a disaster-ridden Oval Office.

It is Karl to whom we owe the current popularity of a learned Latin term. Questioning chief of staff Mick Mulvaney, he followed up a perhaps inadvertently honest response on the matter of Ukrainian intervention in the electoral campaign by saying, “What you just described is a quid pro quo.” Mulvaney’s reply: “Get over it.” Karl, who has been covering Trump for decades and knows which buttons to push and which to avoid, is not inclined to get over it: He rightly points out that a reporter today “faces a president who seems to have no appreciation or understanding of the First Amendment and the role of a free press in American democracy.” Yet even against a bellicose, untruthful leader, he adds, the press “is not the opposition party.” The author, who keeps his eye on the subject and not in the mirror, writes of Trump’s ability to stage situations, as when he once called Trump out, at an event, for misrepresenting poll results and Trump waited until the camera was off before exploding, “Fucking nasty guy!”—then finished up the interview as if nothing had happened. Trump and his inner circle are also, by Karl’s account, masters of timing, matching negative news such as the revelation that Russia had interfered in the 2016 election with distractions away from Trump—in this case, by pushing hard on the WikiLeaks emails from the Democratic campaign, news of which arrived at the same time. That isn’t to say that they manage people or the nation well; one of the more damning stories in a book full of them concerns former Homeland Security head Kirstjen Nielsen, cut off at the knees even while trying to do Trump’s bidding.

No one’s mind will be changed by Karl’s book, but it’s a valuable report from the scene of an ongoing train wreck.