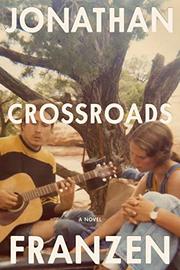 This first novel in an ambitious trilogy tracks a suburban Chicago family in a time of personal and societal turmoil.

It says a lot that, at almost 600 pages, Franzen’s latest novel, set amid the waning years of the Vietnam War, leaves you wanting more. That it does so is also very good news: It’s the first in what promises to be a sprawling trilogy, continuing to the present day, which the author has titled A Key to All Mythologies in what is presumably a wink at its far-from-modest ambitions—yes, à la Middlemarch. That reference is classic Franzen, who imbues his books with big ideas, in this case about responsibility to family, self, God, country, and one’s fellow man, among other matters, all the while digging deep into his characters’ emotions, experiences, desires, and doubts in a way that will please readers seeking to connect to books heart-first. Here, the story follows two generations of the Hildebrandt family, headed by Russ, the associate pastor of a church in the fictional town of New Prospect, Illinois, who, when we first meet him in the lead-up to Christmas 1971, is nursing a crush on a recently widowed parishioner and a grudge against the groovily charismatic leader of the church’s popular youth group, Crossroads, in which three of Russ’ four children are variously involved. Russ’ wife, Marion, who has gained weight over the years and lost her pre-maternal intensity and with it her husband’s sexual interest, is nursing a few secret preoccupations of her own, as are the couple’s three oldest children, Clem, Becky, and Perry. Each of the five characters, among whose perspectives Franzen adroitly toggles, is struggling with matters of morality and integrity, privilege and purpose, driven in part by the dueling desires for independence and connection. Their internal battles—to fight in an unjust war or unjustly let others fight in your stead, to fight their way out of a marriage or fight to stay in it, to fight for sanity or surrender to madness, to fight to define themselves and determine their paths or to cede that control to others, to name a few—are set against the backdrop of an era in which “love” is everywhere but empathy is in short supply, where hugs are liberally dispensed but real connection’s harder to come by.