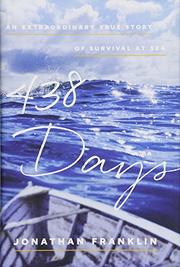 An Extraordinary True Story of Survival at Sea

One man’s grueling odyssey across the Pacific Ocean on a crippled 25-foot fishing vessel.

Documentarian and journalist Franklin (33 Men: Inside the Miraculous Survival and Dramatic Rescue of the Chilean Miners, 2011) meticulously re-creates the harrowing voyage of Salvador Alvarenga, a fisherman whose boat lost motor power hours after leaving the coast of Mexico and was cast adrift upon the ocean in November 2012. Since his arrival in the fishing village of Costa Azul four years prior, optimistic Alvarenga managed a unique work-life balance where “four-day drinking binges might be followed by ten days of non-stop fishing. Or vice versa.” It was during one of these lengthy fishing trips when he and young shipmate Ezequiel Cordoba ran into trouble. Expertly culled together from nine months of recollective personal interviews with Alvarenga as well as official search-and-rescue documentation, Franklin describes what was intended as a 30-hour expedition, but one that ran into stormy weather (forewarned to him by the boat’s owner). As much as the men attempted to navigate and stabilize through the squall, the boat’s motor, radio, and GPS all failed, blowing them far off course and well beyond the Mexican Coast Guard’s limited reach. The ensuing months aboard the boat form an exhaustive, unnerving, and exquisitely surreal survival narrative as Alvarenga, becoming increasingly imperiled and helpless, began implementing desperate self-preservation tactics in order to fend off starvation, dehydration, scurvy, and hungry oceanic predators. More than a year later, in early 2014, Alvarenga was discovered naked and delirious in the Marshall Islands, 5,500 miles away from where he initially set sail (Cordoba died several months into the journey). Though Franklin admits to initially doubting the veracity of Alvarenga’s story (“Who survives 14 months at sea?”), his vicarious documentation ultimately became “an adventure and an education that I will never forget.” Meanwhile, Alvarenga now celebrates the innumerable “small pleasures” of the simple life on land.

Though the story is clouded with public skepticism, this is a fascinating, action-packed account of long-term survival on the open seas.